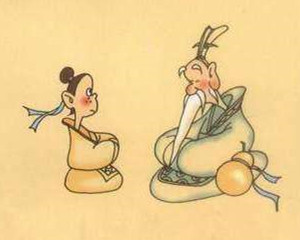 Entertaining to Tea
A guest came to visit a friend, who then sent his son to borrow some tea-leaves from neighbors, so that he could serve some tea. By the time the water was boiling, the son still hadn't returned. Some cold water had to be put in. Gradually, more and more water was added until the cauldron became full. The son still had not returned with tea-leaves. At last the friend's wife said to her husband, "In this case it would be better to invite the guest to have a bath!"