This is Scientific American — 60-Second Science. I'm Steve Mirsky.
"You know, when this little rover landed, the objective was to have it b﻿e able to move 1,100 yards and survive for 90 days on Mars."
NASA Administrator Jim Bridenstine.
"And instead here we are 14 years later, after 28 miles of travel. And today we get to celebrate the end of this mission."
Bridenstine spoke at a press conference at NASA's Jet Propulsion Laboratory today, February 13, 2019. The media event was called to officially mark Opportunity's demise. The rover has been quiet since last June, when a severe dust storm covered its solar panels. Only about one fortieth of the typical amount of solar radiation was getting through to power the rover. And it's been silent since. 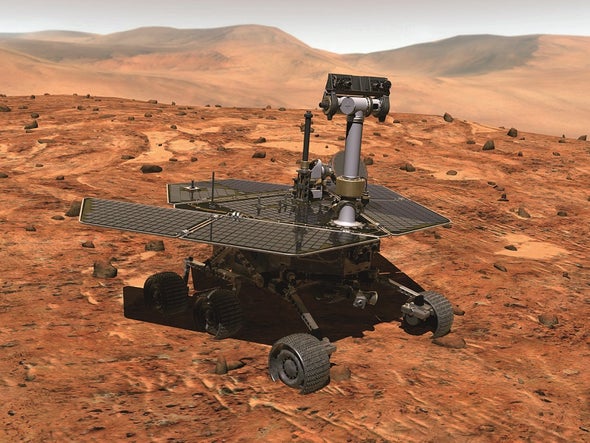 "Opportunity i﻿s very close to the equator, so there's lots of solar power."
Cornell University astronomer Steven Squyres talking to Scientific American back in March, 2006. He was the principal investigator for the science payload of the Mars Exploration Rover Project, better known as the two rovers Spirit and Opportunity. They landed on Mars three weeks apart in January 2004.
The Spirit rover, much further from the equator, stopped reporting back to NASA in 2010. But Opportunity, like an interplanetary Energizer Bunny, just kept going. Along the way it found ample evidence for the presence of water during Martian history.
Back in 2006 Squyres offered this confident and, we now know, correct assessment: "I think Opportunity could last for quite a long time."
For Scientific American — 60-Second Science. I'm Steve Mirsky.