I'm Barbara Klein. And I'm Steve Ember with People in America in VOA Special English. Today we complete our report about photographer Margaret Bourke-White. She helped create the modern art of photojournalism.
Margaret Bourke-White began her career as an industrial photographer in the early nineteen thirties. Her pictures captured the beauty and power of machines. They told a story – one image at a time. The technique became know as the photographic essay. In nineteen thirty-six, American publisher Henry Luce started a new magazine, called Life, based on the photographic essay. In this magazine, the pictures told the story. Bourke-White had worked as a photographer for one of Luce's other magazines, called Fortune. Luce chose her to work on his new magazine.
Margaret Bourke-White took the picture that appeared on the first cover of Life magazine. It was a picture of a new dam being built in the western state of Montana. The light on the rounded supports showed the dam's great strength. The small shapes of two men at the bottom showed the dam's huge size. Bourke-White was no longer satisfied just to show the products of industry in her pictures, as she had in the past. She wanted to tell the story of the people behind the industry: In this case, the people who were building the dam.
The dam in Montana was a federal project. Ten thousand people worked on it. Bourke-White took pictures of those people – at the dam, in the rooms where they lived, and in the places where they had fun. With her pictures in Life magazine, she told a story about America's "Wild West" in the twentieth century.
Margaret Bourke-White was a social activist. She was a member of the American Artists Congress. These artists supported state financial aid for the arts. They fought discrimination against African-American artists. And they supported artists fighting against fascism in Europe.
In the nineteen thirties, Bourke-White met the American writer Erskine Caldwell. Caldwell was known for his stories about people in the American South. The photographer and the writer decided to produce a book to tell Americans about some of those poor country people of the South. They traveled through eight states, from South Carolina to Louisiana. Their book, "You Have Seen Their Faces," was published in nineteen thirty-seven. It was a great success.
Caldwell's words were beautiful. But Bourke-White's pictures could have told the story by themselves. They showed the faces of people in a land that still wore the mask of defeat in America's Civil War.
In nineteen thirty-eight, some countries in Europe were close to war. Bourke-White and Caldwell went there to report on these events. They produced another book together, this time about Czechoslovakia. It was called "North of the Danube." The next year Margaret Bourke-White and Erskine Caldwell were married. They continued to work together.
By the spring of nineteen forty-one, Europe had been at war for a year and a half. Bourke-White and Caldwell went to the Soviet Union. They were the only foreign reporters there. For six weeks, Bourke-White took pictures of the Soviet people preparing for war. Then, one night in July, Soviet officials announced that German bomber planes were flying toward Moscow. No civilians were permitted to stay above ground because of the coming attacks.
As others were hurrying to safety, Bourke-White placed several cameras in the window of her hotel room. She set the cameras so they would remain open to the light of the night sky. Then she joined the others in rooms under the hotel. While she waited for the bombing attack to end, her cameras recorded the explosions, which lit up the rooftops of the city.
Before leaving the country, Bourke-White received permission to meet with Soviet leader Joseph Stalin. She returned home with his picture and a series of other photographic essays for Life magazine. She also had enough material for a book on the war in the Soviet Union. Margaret Bourke-White's marriage to Erskine Caldwell ended in divorce in nineteen forty-two.
During World War Two, she became an official photographer with the United States Army. Her photographs were to be used jointly by the military and by Life magazine. She was the first woman to be permitted to work in combat areas during World War Two.
Bourke-White flew with American bomber planes in England as they prepared to attack enemy targets on the European continent. She wanted to fly with the Army to North Africa, where the allies were fighting German troops in the desert.
But the commanding general told her it would be too dangerous. So she sailed for North Africa instead. Before she reached the African coast, enemy bombs hit the ship and sank it. An allied warship rescued Bourke-White and the other survivors and took them to Algeria.
The incident did not stop Bourke-White from reporting on the war. She flew in an allied bombing attack on a German airfield at El Aouina in Tunisia. She flew over the terrible fighting in the Cassino Valley in Italy. And she moved along the Rhine River with the United States Third Army, under the command of General George Patton. At the end of the war, she was with American troops when they entered and freed several Nazi death camps. She took photographs of the prisoners in the Buchenwald death camp in Germany in nineteen forty-five. 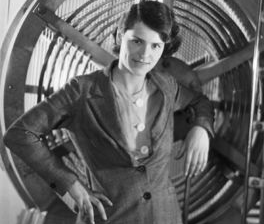 Later, she wrote about the war. She said she sometimes pulled an imaginary cloth across her eyes as she worked. In the death camps, she said, the cloth was so thick that she did not really know what she was photographing until she saw the finished pictures. In addition to her stories for Life magazine, Bourke-White published books on the allied campaign in Italy and on the fall of Nazi Germany.
After the war, Life magazine sent Margaret Bourke-White to India. She stayed for three years as India prepared for its independence from Britain. She photographed the battles between Muslims and Hindus. And she met with the leader of India's non-violent campaign for independence, Mohandas Gandhi. She made a famous photograph of him called "Gandhi at His Spinning Wheel." She was the last person to photograph Gandhi before he was murdered in nineteen forty-eight.
After that, Bourke-White traveled to South Africa. Her job was to tell the story of the black people who worked in the country's gold mines. To get the pictures she wanted, she followed the workers deep into the mine tunnels.
In the early nineteen fifties, she went to Korea to photograph the effects of war on the Korean people. She took a famous photograph of a returning soldier reunited with his mother in South Korea in nineteen fifty-two. The mother had believed that her son had been killed several months earlier in the Korean War.
Margaret Bourke-White tried to make her pictures perfect. Often, she was not satisfied with what she had done. She would look at her pictures and see something she had failed to do, or something she had not done right. Reaching perfection was not easy. Many things got in the way of her work. She said: "There is only one moment when a picture is there. And a moment later, it is gone forever. My memory is full of those pictures that were lost."
More of Margaret Bourke-White's beautiful pictures were to be lost, sooner than anyone expected. In the middle nineteen fifties, she began to suffer from the effects of Parkinson's disease.
Her hands shook so badly that she could not hold a camera. She wrote a book about her life, called "Portrait of Myself." And, even though she was unable to take photographs, she continued to work for Life magazine until nineteen sixty-nine. She died in nineteen seventy-one at the age of sixty-seven.
Margaret Bourke-White was a woman doing what had been a man's job. Her work took her around the world, from factories to battlefields. Her life was full of adventure. She was one of the most important photographers of the twentieth century.