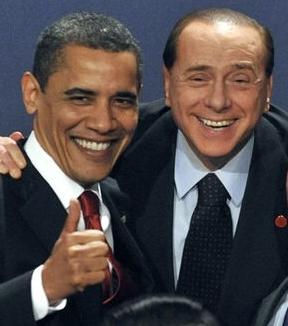 PRESIDENT NAPOLITANO: (As translated.) Good morning. President Obama will leave shortly, so this will be a very short press conference.

And first of all let me express my deepest appreciation for the visit of President Obama, who came here today with his delegation -- and for meeting him there today.

I would also like to stress that the compliance -- the position of the Italian government is fully shared by the other countries. And over the years it has also been translated into the participation by the Italian government in various peacekeeping missions in crises area. And I would like to mention Afghanistan, and President Obama has expressed his appreciation in this connection.

We have also addressed a number of other issues. We're just trying to stress that we have agreed on the need for Europe to play its role in a scenario which has radically changed, and where the center of gravity of economic and political relations has drifted away from Europe.

But Europe still has many important roles to play because of experience of integration, where it's a model of a market economy, and for the historic values which it inspires itself for, indeed, the European constitution.

We can still set an example to the international community, provided that Europe is united and more efficient and speaks with one single voice. And I think that this is widely shared by President Obama.

We are on the eve of the G8 summit, which will take various formats, as we all know, these three days. And this trust in the preparation of this important event, especially when it comes to the financial economic crisis and the measures that have to be taken up to address this crisis, we have a wide convergence of ideas and propositions between President Obama, the U.S. administration, and the Italian government.

Thank you and I wish you (inaudible)o in L'Aquila.